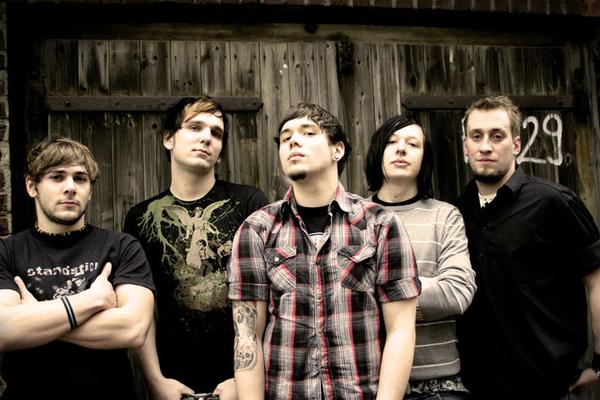 Mail-Interview with Berni and Basti of CALLEJON

CALLEJON is not only is the Spanish expression for "dead end street", but also the name of a German metalcore band, whose career is not at all in a dead end street: With the album "Blitzkreuz" and songs like "Child In The Fog" and "Before You Go" CALLEJON just conquered the charts!
By the way: the artwork on the album cover was designed by singer Basti (Bastian Sobtzick). And also among other musicians Basti is highly regarded as "Cover Artworker". In the e-mail interview, he and guitarist Berni (Bernhard Horn) me to answer your questions:

On 15.06. You released your new album their "lightning cross" and are equal entered with a very good chart position. How does this feel for you?

BERNIE: Honestly, at first it was a huge surprise. We didn´t expect to enter as a top ten. Even though we were pretty sure to get into the charts, and of course we hoped, that we are able to top our ranking from last album, which was 31. But we couldn´t believe, that we enter with such a good position. That made the moment for us even more beautiful.

What is your favourite track on "Blitzkreuz" and why?

Basti, the covers of your albums are always designed by you personally. Why is this so important to you?

BASTI: This is simply the identity of CALLEJON. I mean: It was always like that and it will always be like that, provided that my right arm won´t get rotten and fall off..

You've also created cover artworks for the bands CALIBAN and HEAVEN SHALL BURN. How did these collaborations start? And how was it for you?

BASTI: In most cases, I am asked by the bands directly. Of course, it is always something special for me, to make an own personal contribution and to give the albums a face in the form of an artwork.   Your drummer named "Kotze", which means "vomit". Where does this name come from?

BERNIE: Our drummer´s surname is "Kotzmann", so nothing could be more natural than calling him "Kotze". Alternatively we call him "Kotzbert", "Kotzobotzo" or "Kotzhelm the Valorous" (because he is in fact the puking Viking metal machine from the future).

Who were your musical idols when you decided to become a musician?

BERNIE: When we started with CALLEJON, "Around the Fur" by the DEFTONES was just released and also the first SLIPKNOT album, which has kept us pretty much blown away.In addition to that, Basti and me were very much into Norwegian black metal junk.

What are your dreams for the future?

BERNIE: Actually, we just want to continue doing what we are do now: write music, release albums and go on tour. I can not imagine a better life.