MIC article: MEDINA at her concert in Cologne, Germany 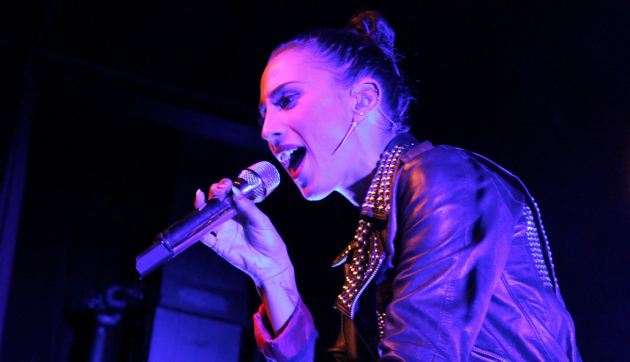 Interview with MEDINA at her concert in Cologne, Germany

With her new album "Forever" and hits like "Waiting For Love" and "Happening" is MEDINA capturing the international charts. For quite a while the sympathetic girl from Copenhagen is not only in her homeland Denmark a star. Her current concert tour took the young musician also to Germany, where she delighted her fans on the 1st of november in the sold-out "Live Music Hall" in Cologne. Before the concert, the Danish pop star took time for an interview with us and revealed why she enjoys listening to rap music in her free time and which role love plays in her live.

Your mother is Danish and your father is from Chile and both were musicians.
Did the fact that you come from a musician family made it easier for you to start into the music business?

Yes, I think so. I think, it is clear. Music has always been a part of my life. It means a lot to me. And I was out with my mother and my father sometimes, when they played gigs. It meant much to me. I think, it was almost natural.

In the beginning of your career, you wrote your songs only in Danish. And you were very successful with that in Denmark. Now you have an international career and you released your former albums a second time in English. How did it feel for you to re-do your albums in English?

You just released your new album "Forever". What is your favorite song on "Forever" and why?

You did collaborations with rap singers in the past: You re-recorded the song "Kun For Mig" with the Danish rapper L.O.C. And last year you performed the song "Invincible" with the British rapper TINIE TEMPAH at "The Dome". Has rap music a special fascination for you?

I have loved rap music and R´n´B since I was a teenager and I still do today. That is, what I listen to most of the time. And I get very inspired by it. It has always been a big part of me.

In 2009 you were a member of the Danish jury for the "Eurovision Song Contest". What kind of experience was that for you?

It was really terrible. I will never do that again. Never ever. Never ever. I don´t like this music so much. It starts, that there are upcoming some better pop songs. But I think, they are wasting time. That is not so much my kind of music. There are a lot of songs and they sound almost like the same. I think... that is not so exciting.

Rap music would have been better for you, right?

Much better, much better. If it would have been "Rap Eurovision Song Contest"...

Last year you had guest appearance in the German TV-series "Anna und die Liebe".
How was that for you?

It was good, it was easy and funny. It was only a single day on the set.

And you played yourself?

Yes, I did. That is easy. It is just like in my own music videos.

"Love" seems to be a very important topic in your music. Which role does love play in your life?

Love plays the biggest role in my live. Love is the number one for me. And it will always be. Love means, love for my family, for my friends, for my fans, as for the people around me, I work with. It´s the most important thing: Love and feeling good. When you are feeling good, you can get along everywhere in the world. Yes, I think, love my main topic.