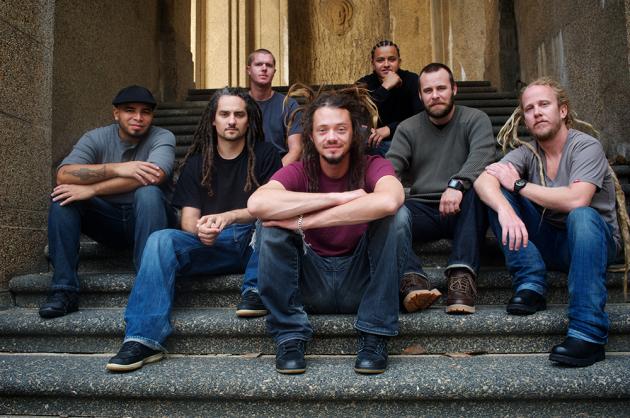 Interview with SOJA at "Summerjam" 2012 in Cologne, Germany

The band SOJA from California is one of the most promising Reggae exports of the last years. With their very own definition of folk music the six guys of SOJA rocked the "Red Stage" at Germany´s biggest Reggae festival "Summerjam" in Cologne. During our interview at the banks of the the lake "Fühlinger See" talked singer Jacob Hemphill and bass player Bob "Bobby Lee" Jefferson about this folk music definition and the brand new album "Strenght To Survive".

Jacob, I´ve heard that you have your own definition of folk music?

JACOB: Right. Folk music is to me, people who tell real stories about real things that really happen. Folk music is like kind of a newspaper for people to listen to. When most people think of folk, they think of an acoustic guitar and a guy singing. But to me it could be any kind of music, it just has to tell a real story about something, that the singer really believes in. And then it gets passed down through generations as people use it to live their lives.
It´s not some fake story about nothing, it´s something that they really mean and they pass it to their kids and they say: "Listen to this guy". And that´s what folk music is to me.

And for that reason "folk music" for you includes also bands like THE WUTANG CLAN and RAGE AGAINST THE MACHINE?

JACOB: Sure, because they were singing about the real situation, that was going on around them. RAGE AGAINST THE MACHINE had more of a world view. WUTANG CLAN had a smaller view of their neighborhood. But just like Bob Marley and just like Paul Simon, they were singing about the reality of their situation. And that´s what made them great and that´s why people are still listening to them today.

SOJA exists since 1997. What did you guys do before? And how did get together as a band?

JACOB: Me and him have been friends since first grade. And the band started, when we were in highschool in 1996, 1997. Then a couple of us went to college and after that in 2003 we just did the band full time. And we´ve been doing that ever since.

BOBBY LEE: Before the band we used to do talent shows in school. We were always music oriented, we always liked music. And we do like some WUTANG covers at talent shows and stuff.

And did you win a talent show with that?

BOBBY LEE: We didn´t really make a competition, but we won.

JACOB: Actually we´re putting the footage of it in our new video, that comes out in a few month. We have the footage of one of the talent shows we did and it´s gonna be at the end of the video. So people can decide, if we won or not. It´s gonna be our new song "When we were younger".

In January you released your new album. Can you tell us about that?

JACOB: It´s called "Strengh to Survive" and we will release it in Europe at the 2nd of october 2012. And we did it with the producer John Alagia, who works with Dave Matthews. And it´s a very "rootsy" album with a rag producer in the style of some of the later Bob Marley albums. We love that and we came up with it and we´re gonna use this kind of formula for the next one or two or even more albums. And we can´t wait to release it in Germany and all of Europe. And we´ll be back in october to do a club show tour. All of october we´re gonna be here. So we´ll have the album, we´ll be here and we´ll see everybody then.

Do you have a favourite track on your new album and why?

BOBBY LEE: That´s my favourite song, too. Because I like the baseline, for it´s real low down beat.

Today it´s not your first gig at the "Summerjam", right?

JACOB: This is our second time here. The first time we were on the smaller stage, and then I got up and I performed with our horn players and with GENTLEMAN, who is a friend of ours, on the larger stage on the headlining thing. So we´ve actually played both stages, but SOJA as a band has only been on one. So this year we got to do the other stage and it´s gonna be awesome.

Did this festival gain a special meaning for you now that you are here the second time?

JACOB: Yes, it was special for us the first time to see this many people involved in Reggae, musicians and fans and promoters and everybody here doing this kind of roots-Reggae thing. We don´t really have this in the United States and you guys really understand, that Reggae comes from Jamaica, but it also comes from Africa and it also comes from North and South America and it also comes from Europe. And you guys have a very good grasp on that. In the United States the Reggae festivals we´ve had, they put all the Jamaican acts at the headliner and they put all the American acts at the very beginning. And we´ve always thought, that was bullshit, because that´s not the way the world works. That´s not the way Reggae is. But in Europe we feel like you guys really get, how to do a Reggae-festival and make it beautiful. So we were pumped the first time to be at "Summerjam" and even more pumped now.

So you like the German audience, even though you have played concerts as headliner in more than 15 countries of the world?

JACOB: We have headlined a lot of festivals and Germany is just another place that we are growing to love and growing to be a second home for us.

Bobby Lee, your clock looks like a real Reggae clock. And many fans will surely wonder, where you can get such a thing?