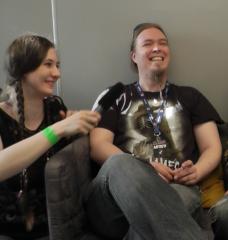 Interview with the Finnish legend STRATOVARIUS at "Karju Rock" 2014. Recorded in the backstage of thevfestival area in Lokalahti/Uusikaupunki before STRATOVARIUS' gig at the 19th of July 2014. Lauri Porra, Matias Kupiainen and Rolf Pilve are telling how they became part of the band. Lauri tells us about his solo career, his upcoming new album "Fly Over" and his work as musical director. Rolf tells us about the album recordings with his other band SOLUTION 45 and how all this is enriching their work with STRATOVARIUS.