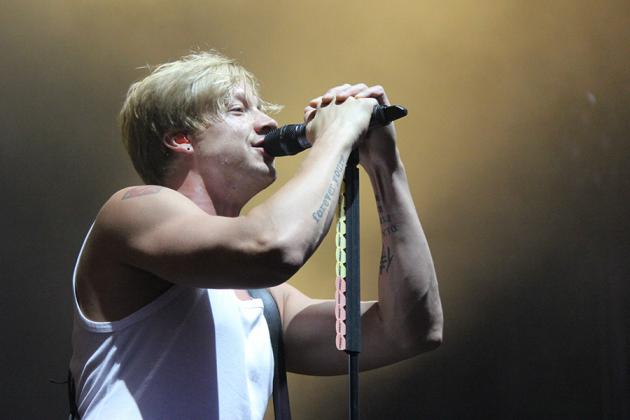 Interview with SUNRISE AVENUE in Paris

SUNRISE AVENUE is a band from Finland, who has just received platinum for their latest album "Out Of Style" and who will release their new live DVDat the 30th of march 2012.
The "La Maroquinerie" is a small club in the eastern Paris . What do these two things have in common?

On 28th of february 2012 SUNRISE AVENUE played right here their first concert in France. Only a few days before the band was playing in the "Mitsubishi Electric Halle" in Düsseldorf, Germany, in front 7500 concert visitors. And today in this small club in the "Rue Boyer" in Paris. The only commonality of these two concert venues: Both were sold out.

During the show the SUNRISE AVENUE proved, that they can rock a small venue with the same energy as a major music festival.
And shortly before the performance I met frontman Samu Haber on the patio of the club for an interview. Despite the tight schedule, he told me about the tenth anniversary of the band, and revealed why he will never stop making music.

You just had a jubilee: SUNRISE AVENUE exists now under this name for ten years.
Yes, big birthday!

Did you ever expect, that it would go that far, when you started the band?
Yes, I did. I mean, as far as ten years. Of course, I expected us to play as a band still now. I don´t know, if I had expected us to be in Paris today, but I´m glad about it.

What were the best moments and experiences in this ten years?

It´s really hard to name them, because there has been really cool shows and really cool trips and nice moments in studio. I don´t know, there has been so many good and though moments on the road of course. But, I think, releasing the first album was pretty nice.

Were there also moments, when felt like giving up?

No, no, never. Of course you don´t feel like doing this maybe everyday. And you are sometimes a bit tired of some things around you. But I don´t make music for the career or for the money or anything like that. I make music, because I love to make music. And even, if we would stop playing as a band, I would still keep on making music.

You are used to play concerts in very big venues, in Germany and in Finland for example. And this today is the smallest concert on your tour.

How does it feel for you to play in front of such a small crowd today?

It´s really cool to do the small shows as well. It´s really nice. I mean, you don´t need 7000 people to enjoy your moment on stage. I think, the smallest crowd in the past has been like 4 people in the very beginning and it was still fun. So it doesn´t matter. And you know, after a small audience, the big crowd feels even better. I like it.

You recorded the first part of this tour and you will publish a Live-DVD now on the 30th of march. What can your fan expect from this DVD?

There´s a lot of good moments, the nicest moments from the tour last year.
I think, it sounds even better than the album. The presence of the guys is much more there. A lot of people come to the concerts, they know how we play some of the songs and stuff, but the DVD is a must-have. You should have it.

What was the last concert, that you visited as a member of the audience?

It was in Hamburg, when we went to see MY FRIST BAND, who were supporting us in Hamburg. And actually the last concert was also MY FIRST BAND in Helsinki at "Tavastia"-Club. It was the first time I saw them in Helsinki and I really liked it.