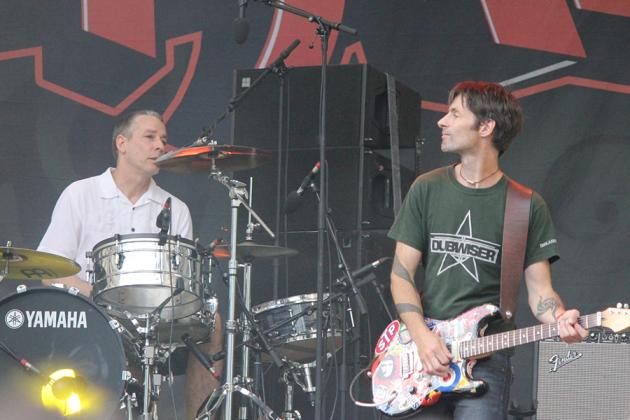 Interview with DREADZONE at „Summerjam“ 2012 in Cologne, Germany

DREADZONE is a real "Dread-band" - even though not a band members are wearing dreadlocks. With songs like "The Good, The Bad & The Dread" and their unique mixture of Dub-Reggae, Trance and Techno the British band made the audience of the "Summerjam"
dance like crazy. With our whitout dreadlock: drummer Greg "Dread" Roberts, singer Earl 16, bass player Leo Williams, guitar player Chris Compton and Chris Oldfield at the tables
can´t be stopped on stage.
In the interview Greg "Dread" revealed the origin of the bandname and explained to me, what real "Dread-music" is:

Your music contains elements of Dub-Reggae, Techno and Trance. And sometimes you also put in a bit Rock and Folk. How did you come up with the idea to combine so many different styles?

When we started DREADZONE in the 80s, one of the big things that was happening in the UK was electronic dance music, the rave scene and everything. And it was very inspiring as a great musical movement. So it felt natural to mix up dub baselines and samples, because we were using the sample a lot. And then with the core more dance music. You called techno, which I wouldn´t say, that we were so techno. Because we have never really been techno, trance, but we´ve had elements like that. It is very limiting, when you say something is like techno, because you imagine kind of hard raving, which was one element of it. But when we first started that, one of the main things was to make records, that stand the test of time. And we start putting beats on that from a certain age. So we always kind of mix the bass a bit higher, that made it more warm, more feminine and more melodic. And I like to think, it just sounds like good music now. But it does have that dance element, because we like to make people dance. And even though we could be playing Reggae or dub, we like to have a kind of jump up, bouncy atmosphere to the music, so that it makes a lot of people move. So it isn´t just nodding your head. Now there are a lot of people with dub-step and things like that for mixing up the dub with a double time beats and with more electronic things, so I like to think, that we were blazing the trail back then. It´s just, what comes naturally. We´ve taken elements from that pervious group, a bit of Rock´n Roll. And I think, that things like folk, you say, comes from looking from different places to sample. Interesting ideas, so we would maybe sample some strings. Or biggest hit is "Little Britain", which is of sounds bit of a orchestra. Funny enough, the sample that we use is from Carl Loewe, which I believe is a German. But it still has that kind of UK classical music. I like listen to a lot classical music, I like bringing things in from all different areas: Indie music. That´s why we seem so quite eclectic. We tried hard to pin down in a certain genre, which just worked against us sometime, but it´s all about the music. It´s just about good music and the baseline.

Dreadzone - has your bandname anything to do with Stephen King´s "Deadzone"? Did you wanna make a kind of positive version of that?

Yes, that´s a very good question, because as you can see: I don´t really have Dreadlocks. And even though I´m a white man, I never had Dreadlocks. And it´s not really been about the Dreadlocks. It´s a play on the word "Deadzone". It´s such a good name and it stuck. A lot of people think, we are a kind of crusty, dubby band, but we´re not. It´s just a good name. And Dread equals fear. We´re living in a time where we never know what´s gonna happen, so we are all in the Dreadzone.
It´s just that there´s no white man with dreads. There´s nothing wrong with white man with dreads, but you get typecast as a certain type, especially in the UK. But DREADZONE, you are absolutely right, came from the Stephen King film with Christopher Walken. And we like movies. That´s one of our influences. We take dialogues and bits from films. Especially in the beginning, because we didn´t have vocals. So it was kind of dub samples, the beats and maybe some film samples just to give it character. I think, that´s a very important thing: We still sample from films. Except it´s a lot harder these days to clear a piece of dialogue. In the past we just used it and didn´t think about it. At the last album we had to clear tree or four lines from one film and they wanted to like two grant. So we have to be more clever with it. But we are more about writing songs now and getting a lot more lyrics and a lot more melodies involved. That´s were we are, I feel like we can progress by being better songwriters. Being able to express an emotion or a feeling within a few lines or a few words. It´s a very fine art. I appreciate good songwriting.

I took a look at your song titles and I found songs like "Return Of The Dread",
"American Dread", "House of Dread", "The Good, The Bad & The Dread", just to name a few. Why?

You name a title of a song and then you say it in a way though, I put "dread" in there. And it is very hard sometimes not to do that. We did it on the last album and I felt like we shouldn´t have done that. It´s "dread", it´s like a way of life. It´s our attitude to life, it´s our philosophy. Just like "dub" is a philosophy. It´s an approach to the music, like punk was. I like to think, that something dub is the opposite of jazz. It doesn´t "overthink" the music, it´s more about the feeling. Thank you for pointing that out. Maybe we should just call every song on the next album Dread 1, Dread 2, Dread 3.
After all these things we´ve never used this sample from "Predicts 2", where it goes
"This is dread man, truely dread". We never used that, even though I got it ready for a sample.
Now I have to stop, you make me self conscious of my dread-words now.
We couldn´t help it, in the beginning we put "The Good, The Bad & The Dread" on the first album, because that´s "The Good, The Bad & The Ugly" obviously. "American Dread" was kind of written post Obama being voted in,and it´s kind of the movement of people waking up in America. But it was also like a little desire for us to go to America. I almost wrote the song like "We´re gonna come to America. Wake up, we´re coming over!". We got a bit of a career and it would be nice to spread the word in America as well. So it was a bit of like " " "Take notice of us!". But I don´t know, if it has worked.
We are not massive, but we´ve been pouring up for so many years now. We got a little following, we got people on the internet who know, who we are. We got people finding out about us and more and more people liking us, as they see the show and they hear the music. And they realize that there´s a better quality of the music. You´ll discover, when you go back and look at the earlier albums. We´ve grown with different people. One of the many common things I find is, that people who grew up with us in the 90s, who have kids now, who are teenagers, say: "Wow, listen to DREADZONE!" We are kind of cool for a lot of kids as well. They are teenagers. Even though they are young and there are so many new acts out there, hipsters, kind of cool trendy Indie-acts. It´s just because of the nature of the business. The press is not taking any note of us, because we are all so old, even when we don´t look like it.

Britain is not known for Reggae-bands. How is it to be a Reggae-band in Britain?

I wouldn´t class ourselves as a Reggae-band. Because we mix it up with the electronic music. People view us as more of a festival, dubby dance band. Even as a DJ I don´t dj pure Reggae or dub. I mix it up, so it´s hard to put us in a genre. I don´t know, how we are reviewed in England. It´s just music, good music. It´s "Dread-music"! That´s why we use the word "dread" so much. It´s our music, it´s our way of life, it´s our philosophy. It´s
"Dread-music" and it´s coming your way!