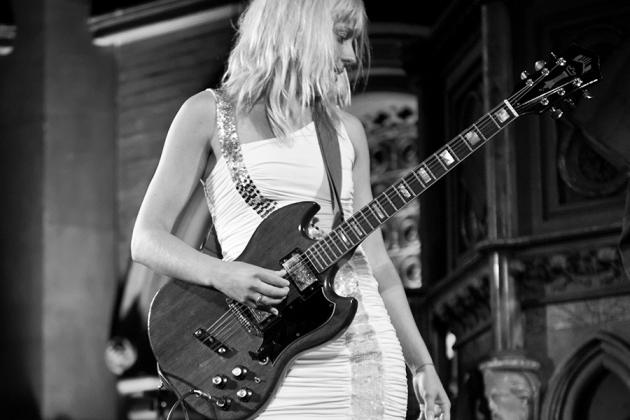 Interview with TALLULAH Rendall at the 25th "Umsonst & Draussen" festival in Würzburg, Germany

Such an influx of visitors has Würzburg in Germany never seen before: 85.000 people came to „Umsont & Draussen“ to celebrate the 25th birthday of the festival and to enjoy the performances of the bands.
Of course the initiator Ralf Duggen and his 200 team members came up with something special for the anniversary: In addition to acts like MONSTERS OF LIEDERMACHING, CÄTHE and HELLSONGS a young British artist attracted the attention, when she entered the stage with her guitar on Saturday evening and excited the crowd: TALLULAH RENDALL.
In one point all the reviewers agree: From her music comes from a strong fascination, even though it seems almost impossible to press her songs into a genre - or perhaps exactly because of that?
Her third album,"Alive" is available in Germany now and beside of that we will certainly hear a lot from TALLULAH RENDALL. By the way, she has experience with anniversaries, because recently she was asked to sing on the 70th birthday of the legendary Shirley Bassey.
When we met at the hotel breakfast, Tallulah offered to do spontaneously a short interview. Quite naturally, quite bluntly, in the morning sun on the terrace of our hotel, the sympathetic girl from London told me the story behind that gig and why she´s so fascinated by the audience of the "Umsonst & Draussen“ festival.

I read a lot of reviews about you and they all say, that your music is fascinating, but it is hard to describe, what it is, because it is such a special mix. How would you describe it yourself?

I think, it´s very human. It goes from very fragile and delicate to really big and strong and powerful. It feels to me like it includes the dynamic of being a human being, what it´s like to be a woman.
It starts with a kind of folky riff, but than... You know, I love Rock´n Roll and I love psychedelic Rock´n Roll. I love kind of that whole spectrum, so my music hopefully reflects that.

How did it feel for you to be here on stage yesterday?

It was amazing! It was really amazing last night to play to an audience like that, when you have no idea what to expect. And then suddenly there is about 4000 people.
And you can really feel the audience warming to the show At the begin they are kind of shy, they are kind of sourcing out. And then there was this point, when suddenly I could feel really strongly, that they were really really enjoying it. And then by the end having everyone singing along... It was incredible. It felt quite emotionally to me actually. It was the most amazing respond, that I ever had from an audience. And I was really not expecting it So it was great, it was amazing.

You have a new album. It´s your third album and we can also buy it here in Germany. And you published it also as a special edition, right?

It´s a book. It´s basically a hardback and each of the songs has a piece of artwork to represent it. I collaborated with eleven different artist, painters, dancers, sculptors, jury makers and each one created something to reflect a song. And then we made little films and short documentaries. That´s the album.

And there are also some really beautiful pictures of you in the book. Which one is your favorite?

I like the picture, where I´m screaming and reaching out of the frame. I was living on a boat. And what is so funny about it, I was actually going like this, because there was a camera man filming me and talking photos and there was a light standing on a tripod and there was this massive wind and the light went into the Thames and I was trying to grab it. And that´s the moment, when the photo was taken.

You did one of the first gigs in your career at the birthday party of Shirley Bassey.
How happened that?

It wasn´t the first gig of my career, but she came to my first every gig. It was my first London-gig, when I was 18. It was in this tiny little pub in the middle of nowhere. And she is a very old friend of my mom. So she came along just as a kind of supports. And it was really funny, because people thought she was a look-a-like. No one actually realized, that it was her. And then many, many years later, she had her 70th birthday and asked me to come and sing, which was an amazing privilege. To sing, not only for her birthday, but in front of about 500 people, all kind of very, very well known musicians. Tom Jones was kind of in front of me as I was singing, it was really kind of nerve-racking. It was great, it was an amazing experience. And she´s a fantastic, inspirational performer and I think it´s brilliant, that she´s still doing, what she does.
I can´t imagine not doing it, I can´t imagine not writing and not singing. It´s not a self decision, that you suddenly one day go: "I´m gonna be a writer, I´m gonna be a performer", it´s what you do. And though the thought of not doing it is completely alien. So I can totally understand why aged 70, aged 80 these performers are still stepping up on stage and doing this, because it´s what you love and what makes sense to you.