Interview with Aaron Matts of BETRAYING THE MARTYRS 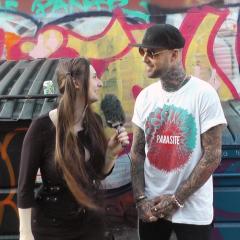 Interview with the French metalcore band BETRAYING THE MARTYRS in Downtown LA. Front man Aaron tells us about the band upcoming new album and European tour. He reveals what he likes most about his bandmates, and how it feels to be the only British guy in French band. Recorded on July 10th, 2019, at 1720 in Los Angeles, before the cancelation of the North American Summer Rapture tour due to a van accident.