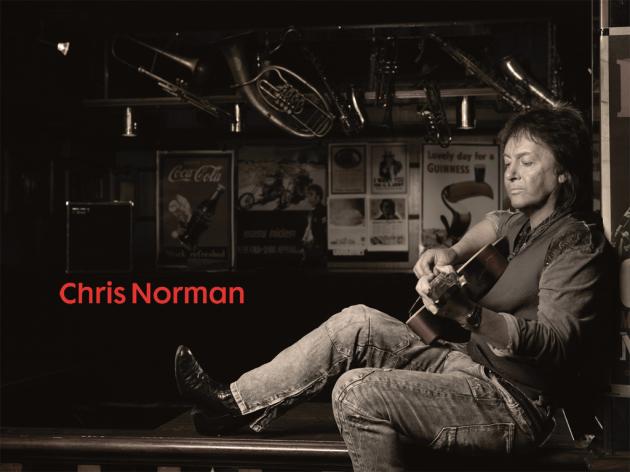 With his distinctive raspy voice and hits like "Living Next Door To Alice" fascinated Chris Norman the audience as singer of the band SMOKIE already in the 70s. For over 40 years in the music business, he is also as a solo artist internationally successful.

Nowadays the British singer lives with his family on the Isle of Man between Scotland and England and supports his children in their first steps as a musicians. And he is still far away from considering to retire.

Last year Chris Norman released his new album "Time Traveller" and went on tour with it. All who couldn´t get tickets for his concerts in Germany anymore, should note the 4th of may in the calendar: Because that´s the release date of the Live-DVD from "Time Traveller" tour.

In our telephone interview Chris told me not only about this concert-DVD, but also about his time with SMOKIE, the collaboration with Dieter Bohlen and the secret of his voice.

It's a cover album that contains many songs from the 60s and the 70s.
With this album I actually travel back in time. Due to that it was not difficult to find an appropriate title. "Time Traveller" is a musical journey through the time.

During the years you supported charity projects with your music. For example the SMOKIE-concert for the victims of the fire in Bradford "Valley-Parade-Stadium" in 1985 and your commitment "Kinderhospiz Mitteldeutschland" in Germany. Why is this so important for you?

Actually, I haven´t done so much. There are other people who devote their entire lives to charity projects. But if you can import money for a good cause, that's great and important. If you are asked, and you are in the position to help, why not?

You have been working with a very famous German producer. In 1986 you did the song "Midnight Lady". How was it for you to work with Dieter Bohlen?

When I started to work with Dieter Bohlen, I didn´t know who he was. Outside of Germany he wasn´t that well known. The collaboration was a little stressful, because we had different ideas about music. He wanted to write songs for the album. I wanted to write songs, it was my album. He liked synthetic music and wanted to put synthesizers into the songs. I like real music, handmade music, guitars. It was not the best combination. So we are not working together anymore, but it's all good between us. We quit the cooperation for good. I was never arrogant to him and he was never arrogant to me.

You are successful as solo artist and you had a career with SMOKIE. What are the biggest differences between playing with a band and making music solo?

I also have a band now, that goes with me on tour. So it's not so different. With SMOKIE all band members were equally important, and decisions were made democratically. Now I've got more freedom to decide. I often miss the SMOKIE-boys. We had a great time. It was a real camaraderie between us. We have experienced the initial success together as a band and that connects you.

In 2004 you won in the German TV-show "Comeback - Your big chance".
Did you need time to make the decision to participate in such a show?

Yes, the decision to join the show has actually cost some time. They asked me back in September of the year before. The show was called "comeback" and the question was "comeback from where?". But the selling of the album, which I had just published, wasn´t going that great. And we thought that by such an appearance, people would draw attention to the album. And it happened that way. First I didn´t feel so good with the idea of the participation, but then it was okay. And the music, which I published afterwards, got a very good feedback.

You are not the only musician in your family. Your children Susan, Michael and Steven founded the band LITTLE FEVER. Are you proud of them, because they are making music, too?

They just changed their name to SUSAN NORMAN BAND, because it is Susan's band. I am very proud of them and I support them as much as I can.

How was it you to produce their first album?

I know how it works and I have a studio. So we recorded a few songs and then it became a whole album. A great album. I hope, that now the record companies will show interest. You need a label and someone who is younger than me and is more closely associated with the modern music business.

What is the secret of voice? Where does this sound come from?

I used to have a very clear voice. When I was 11 years old, I even sang in the church choir. But then I did a lot of gigs and also sang in a way that it was very stressful for my voice. For example I sung very high or screamed. Due to that it became more and more scratchy with the years. And when the first SMOKIE record was released, people identified us with this raspy voice. It has nothing to do with alcohol or cigarettes, I have just overloaded my voice often, when I was younger.