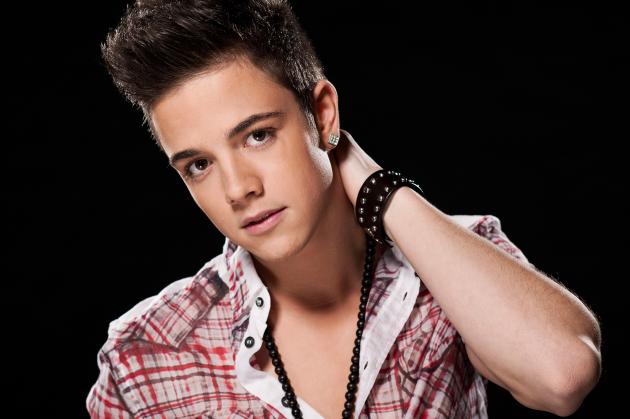 Interview with LUCA HÄNNI in Cologne

He is not only is he the youngest ever winner of the German "Idol Show", but also the first Swiss, who has won the casting show so far:
We met Luca Hänni in Cologne for an interview. To participate in Germany's most famous talent show the 17-year-old even dropped his bricklayer apprenticeship - a good decision, as the success of his debut album "My Name Is Luca" shows.
Luca told us not only about his upcoming tour, which will start on the 1st of october, but also revealed why we can see him very soon as underwear model:

Your life has changed extremely during the last months. You went out of your apprenticeship into the professional music business. How did you experience this time?

The triumph of the German "Idol Show" was definitely a huge stepping stone. Before that all I was at the construction zone. Music has always been my passion. Of course I wanted more. But it was just very difficult. I had small gigs, but that was not what I dreamed of. So I said to myself: "Hey Luca, you have to do something now!" and I tried it at the "Idol Show" and then everything changed: I am no longer at the construction zone, I have the chance to live my music for really and to show the people out there what I like and what my passion is. That´s great.

Yes, I started in kindergarten with drums. Then I played the piano, then the guitar and then I started to sing. The singing came at last, I just tried it out. And now I like to combine it all together. I play instruments, not professional, but just to accompany my voice. I think it is cool, when I have an instrument in my hands. No matter if I am at home or if I play concerts.

Which exceptions did you have, when you went to the "Idol Show" casting? Were you also afraid that something might go wrong?

Of course I was hoping, that I can pass the casting. And I thought, that I might pass the
"recall", if I work really hard. But I never expected to get into the TV live shows and to win... When you go to the casting, you don´t consider such things, because this whole process takes more than half a year. But I was very happy, when the live shows began and it really started.

Your first album is out now and entered with a very good chart placement. How does it feel for you?

But the success in Switzerland makes you extra proud, right?

Yes. I think, it is the first time since 1952, that an musician from Switzerland has a number 1 hit in Germany again. It is of course a great honor to achieve that.

You're also the first Swiss, who won the German "Idol Show" and you are the first winner is a minor. Was there ever in trouble for you because of that?

It just mean, that you can´t be too many hours on the film set. I can´t shoot for my music videos from 8 o´clock in the morning to 11 o´clock in the night. But when we shot my videos and stuff, there was never a problem, because we were always finished earlier. Or if not, we pushed into two days. Apart from that, there has never been trouble. For contracts of course my family needs to sign, too. But very soon, on 8th of october, is my birthday and I will be an adult then.

What is your favorite track from your album "My Name is Luca" and why?

My favorite track is "I Will Die For You" because it goes in the direction, where I would like to go, when write songs myself later. This song has become the single of the album now. And I turned the song even more into mine: I expressed the wish to re-record the single again together with DJ Mike Candys from Switzerland and to something else out of it, what is more from me. That went well, and then the new single "I Will Die For You" with Mike Candys was published. And I think the result is quite cool, it's definitely "loungy" and it is nice to play the song that way.
It is also very important to me, to bring something of myself into the music, because after all I'm standing on the stage. And there must be something coming from me.

I've heard, we can see you soon as an underwear model. Is that true?

Yes. I did three photo shootings for "Migros". The brand is called "Nick Tyler", and I am the new face of this. It will all probably be launched at the 8th of october, on my birthday. First only to the market in Switzerland, because it is a Swiss product. But we are currently working to fix everything, so that it will be available via online store in Germany, too. I am looking forward, to do that.

And you are also involved as a designer?

Yes, exactly. We designed it together. That worked pretty well and the shootings were fun. This is something different. I like photo shootings and these shootings were very different. But it was a great experience. And I am happy now, when the whole thing is launched to market.

There is also a line for girls, that you've designed, right?

Yes, exactly. But that comes out a month later.

During the summer you did many gigs on festivals, but now your tour going to start. How does that feel?

Now there comes the biggest thing, that an artist can experience. My tour starts on the 1st of october and that will great ! The band is already doing rehearses, and I'm joining them next week. And then everything is supposed to work. We will play 90 minutes. We will play the album and my two singles. It will be a great show and I just can´t wait to do it! And of course I hope you people out there will like it!