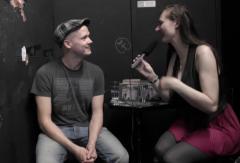 Interview with the percussive guitarist and vocalist PETTERI SARIOLA in Helsinki, Finland. Recorded at the 20th of September in the backstage of "Semifinal" / "Tavastia Club". Petteri tells us how he feels about the Finnish music awards he got, about the difference between be a solo artist and playing in a band, his upcoming Europe and Asia tour, how he chose the songs for his new album "Through The Eyes Of Others" and which one of them is dedicated to his bandmates Jukka and Tapio of DEAD SIRIUS 3000.