On The Rocks, Helsinki
21st of November 2014
Language: English 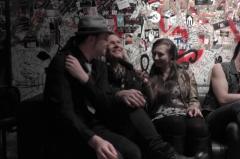 Interview with the band PRIVATE LINE in Helsinki at the 21st of November 2014. Recorded during the release party for the band's DVD "Private Line - Acoustic Studio Live". In the extremely small, but extremely cool backstage of "On The Rocks", the band took time for an interview - besides the naked men and the party vibes right next to us ;) Lead singer Sammy, guitarist Jack and drummer Eliaz are telling us about partying, the craziest things they ever did on an after show party, playing golf with Alice Cooper, and the upcoming Germany tour of Sammy and Ilari.