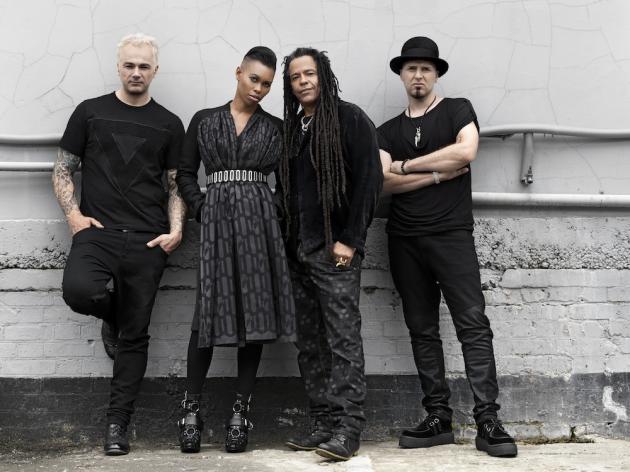 Interview with SKUNK ANANSIE in Cologne

After a great career in the nineties and their reunion in 2008, is the British cult-band SKUNK ANANSIE back with a new album and an international tour. In the interview singer Skin and guitar player Ace are telling, where their band name really comes from and why modern technology made their band life much better.

I have heard a story about the origin of your band name. SKUNK ANASIE is named after a mystic african character and a special kind of weed. Is that right?

SKIN: "Anansie", the spiderman, is half man half spider and character in nursery rhyme. Like a kind of tale that you tell to your children. It is a little bit like "Bre'r Rabbit". The "Bre'r Rabbit" stories were regionally like the "Anansie" stories and originally from West Africa. And "Skunk" is just skunk, the animal. The black and white animal from the jungle. I know, there is a big fat something from Holland that you can get. We know about that, but that is not what we named our band after. I don´t even smoke.

ACE: When we first started, people used to come backstage and said: "Oh, I brought you some weed". And they used to bring the skunk weed, because that´s what they thought. But we said: "No! Take it away from us".

Skin, you have this name for a reason, because of your special hairstyle or better "skinstyle". Why did you choose this "skin style"? What do you want to express with that?

SKIN: The band called me "Skinny". My nickname is Skinny, because, when I was really little, I was really, really, really skinny. And then I just shortened my hair to skin, when I got into the band. But everybody, all my family, all my friends, for a long time just called me Skinny. So it has not really anything to do with my style or the skinhead or anything like that, what we don´t have anymore. But I do love clothes, I don´t deny that, but my style always changes. Skin is just for Skinny.

You just released your new album "Black Traffic". What can your fans expect from that?

ACE: They can expect lots of cool stuff actually. We put a lot of working into this record to make it new and fresh and exciting. It is very dynamic. It´s very powerful. It´s very passionate and it has kind of some organic electronic in it as well.

You recorded "Black Traffic" in London and you produced it yourself in cooperation with Chris Sheldon, who also worked for the Foo Fighters. How was this whole production process for you?

SKIN: It was actually really good fun for the first time ever. We just got set up in a studio that we know really well. We got a great sound in there. Working with Chris Sheldon is a joy. Apart from being a very funny human, he is a very good producer and so the teamwork of us, having our creative ideas and him being able to input his ideas and also create something new, went great. Everything that we wanted him to do was really good fun. It was a great teamwork.

Do you have a favourite track on "Black Traffic" and why?

ACE: I really enjoy "Sad Sad Sad", because we start playing live again now and it is my favourite song to play live. So that´s my favourite at the moment.

SKIN: Mine is "I believe in you", which is the first single. I really like that song, it´s my favourite in the last week.

In 2001 SKUNK ANANSIE disbanded and in 2009 you had your reunion. How does it feel for you now to work together? Which things chance and which things remained?

SKIN: The reunion was in 2008 actually, we did a year sneaking undercover under the regard for being back together. I think, it´s a lot easier. We are more grown up. It´s a bit of a cliche, but we´ve got more developed personalities. We also do a lot more ourselves, we do everything ourselves with our manager. We kind of have a lot knowledge in the band now, so we can. We have the ability of being a band for nearly twenty years. We can do this very technical stuff ourselves. I mean back in the days, there were no mobile phones, there was no internet in the nineties. So even the way people correspond to each other was completely different. People used to write letters, that never happens anymore. The entire industry is completely different now.
People have a lot more access to music at their finger tips. When we were kids you had to go to a record shop and buy a record. Now you can load it from the internet or just digitally download it onto your phones. It is very different now. But I really welcome the changes. I think, it´s fantastic, how easy I can access my music and movies. I am downloading movies right now in the other room. And I think we are a very modern technology savvy band. We really like that, we actually like the future and where the journey is going to take us. We want to be part of it.

So modern technology made your band life easier?

SKIN: Yes, it made everything a lot easier. We couldn´t have made this band sound like this back in the nineties. We couldn´t have had an own label back in the nineties, because would have had employed plenty staff. Now it´s just us. And we can do everything: Our social network is signed, we had our website, which it brand new since monday: www.skunkanansie.net. We have redesigned it and it is a very modern design. It has a lot of information on it and not so many pretty pictures. Just what we do and how we do that. We really welcome modern technology, we think it really helped to make everybody´s life a lot easier not just our´s and not just our industry.
And to all the people, who moan about the way it used to be and how much money they used to make, I´m saying: "Yes, you make less money, but you do a lot less work for it".
I think it´s up to your individual state of creativity, whether it´s positive or negative. Because if you are slow and lazy and looking back behind you all the time and be nostalgic, it is not going to happen for you. But if you are looking forward and you are welcoming the changes, it´s going to happen for you.

ACE: I think, what has changed and what has stayed the same, is that we know us now and we know, when to take a break and physically rest ourselves and to become recharged, so that we don´t get worn out like before. And what has stayed the same, is the chemistry, the vibe and the energy of the band. And that´s why we are still together and what runs us. It´s our fuel. The vibe and the chemistry is the fuel for the „SKUNK-motor“ and that has always bonded us together.