MIC article: SUNRISE AVENUE at "Coke Sound Up" in Berlin 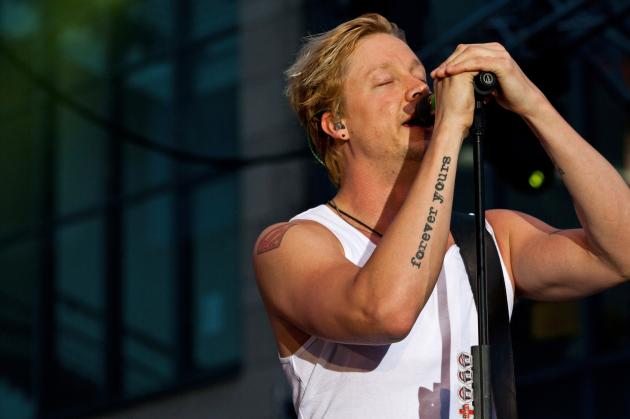 Interview with SUNRISE AVENUE at "Coke Sound Up" in Berlin

A huge stage directly under the "Brandenburg Gate", six top acts of the national and international music scene, bright sunshine and 750 000 visitors: The "Coke Sound Up".
To celebrate the "Day of German Unity" took last weekend in Berlin the largest music festival in Europe place. Under the slogan "Festival of Happiness" were bands like CULCHA CANDELA, MANDO DIAO and JENNIFER ROSTOCK rocking the German capitol city.
And in the middle of that all I met the Finnish rock band SUNRISE AVENUE for an interview, whose gig was one of the festival´s highlights.
In addition to the current single "I Don´t Dance" and other energetic pop rock songs, there were also emotional moments with ballads like "Stormy End", which enlightened the whole place in the shine of numerous lighters.
With me singer Samu Haber talked about his way into the music business, the new album "Out Of Style" and the future plans of the band:

What was your way to became a musician? Did you study music or did you do something completely different?

I never studied anything, because I knew exactly, that I will become a musician.
And because I knew, that I wasn´t talented for anything else but music. So I better bought a guitar immediately.

You say, that "Out Of Style" is your best album. Why?

Because it is a real band album. The band was totally free during the production process and we could decide a lot of things on our own. There was not so much pressure anymore. The music comes from the heart.

What are your plans and dreams for the future?

The band and me are starting with our tour now. We will play 100 concerts in 20 European countries. And if there is a bit time left, we´re gonna make some new music.