Interview with Jryki 69 of THE 69 EYES 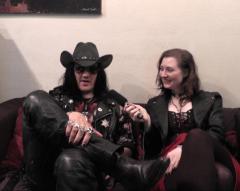 Recorded on February 7th, 2020, before the band's concert at the Whisky A Go-Go in Los Angeles, California. Jyrki 69 tells us about The 69 Eyes' new album "West End", his take on Hollywood, his 30 years in the music business, being a vegan, and his friendship with Wednesday 13. He reveals the backstory behind the cover artwork of "West End", and how it feels to be back at the Whisky A Go-Go after 10 years.