MIC video: THE SHRIEKS in Helsinki

Interview with THE SHRIEKS 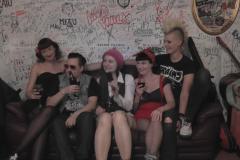 Interview with the all female Psychobilly band THE SHRIEKS. Recorded at the 12th of September 2014, before their concert at "Bar Loose" in Helsinki, Finland. Singer Tipsy Mayhem, guitarist Candy CanCan, base player Hellka and drummer Melvis Hessley are telling us about their first album "Blood and Lunacy", their record deal and their upcoming 2nd album and their Germany tour with BLACK MAGIC SIX and THE COUNTRY DARK in october 2014.