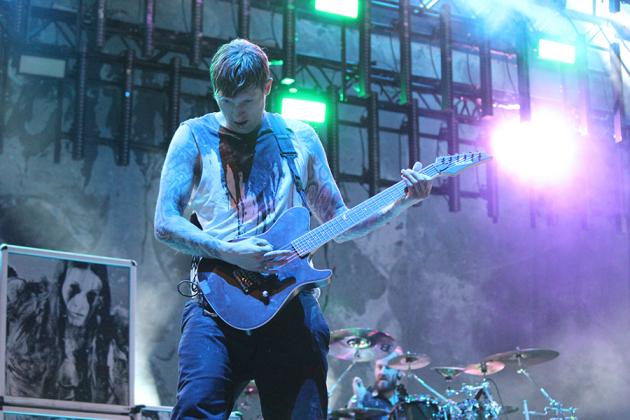 Interview with CALIBAN at "Deichbrand" 2012 in Cuxhaven, Germany

CALIBAN is not only the main character in Shakespeare's "The Tempest", but also the most successful German metalcore band next to HEAVEN SHALL BURN.
As a late-night headliner Andreas Dörner, Marc Görtz, Denis Schmidt,
Marco Schaller and Patrick Grün thrilled the audience at the sold-out "Deichbrand" festival in Cuxhaven, Germany.
Before the big show singer Andreas and guitar player Marc received me for an interview in the CALIBAN-tour bus. And I learned not only about the new album "I Am Nemesis", but also why the first metal song in music history actually comes from THE BEATLES:

You've been already been on tour in Europe. And soon you will go on tour to China and Russia. How does this feel for you?

MARC: We have been in Russia we before. We were already three times in St. Petersburg and Moscow. That was always cool. This is now the first time that we go there fora full tour. China is postponed, but is caught up in the foreseeable future.

ANDREAS: Russia is cool anyway. The gigs, that we played till now in Moscow, St. Petersburg and Yekaterinburg were really cool. The people are very grateful for what you're doing and are not oversaturated. There concerts are really thrilling and I'm very curious, what the rest of the gigs in Russia will bring.

In February you released your eighth Studio album "I Am Nemesis". How was the response?

ANDREAS: As far as I know, it was mostly positive. I have heard nothing negative. But I keep myself far away from many things. If you read 100 reviews and if two are shit, this is what stays in your memory. That´s why, I better keep myself away from it. I know what we have done and that I like it. And the reactions of the people at the shows, from friends, from the officials and of the press, were very positive.
Even former fans, who had turned away from CALIBAN, actually found a new connection to our stuff with this record. That was a great feedback for me.

MARC: I've also heard nothing negative. I read not too many reviews, not because I do not care, what people think, but because I make music mainly for myself, for us. And I have to like it. There will always be a few, who say something against it, but what I've noticed so far, was very positive. I've even heard, that press feedback should have been "euphoric". So it seems to go well. Good, because it took us a lot of time to finish this album.

How long have you been working on "I Am Nemesis"?

MARC: About one year. Normally we write an album in 3 or 4 months. This time we were also much longer in the studio. Only to record and to optimize the vocals and the lyrics we worked four weeks in the studio. Four weeks for shouting and singing. And then mixing. It was much longer than usual.

ANDREAS: We usually do the vocals in one week, this time we really put a lot of work into.

In 2011 you published the EP "Cover Field", which includes your cover version of the Beatles song "Helter Skelter". Why did you choose this song?

MARC: Because this is the first official metal song ever. I've certainly read many times, that there was a band that thought they had made the hardest songso far, and that John Lennon said then: "I can do harder, I'll do it harder." And then they made this song, which was even harder. And "Helter Skelter" is now often in retrospect regarded as "the first metal-tinged song". So we thought: That fits, let´s take this song.

ANDREAS: THE BEATLES have set the foundation for the "rock and roll metal scene" at that time.

MARC: And if you listen to "Helter Skelter", you notice that this song is not compliant with things like "Yellow Submarine". In "Helter Skelter" you can hear the intention: "Let's make a hard song".

ANDREAS: THE BEATLES were also the first to have something like electric guitars, where there were initial strains and 10 000 guitars were superimposed. They moved at lot. They're not for nothing THE BEATLES.

I noticed that you like to do projects together with other metal bands. For example, to cover of your album "Say Hello To Tragedy" was designed of the Basti from CALLEJON. And youdid a split CD together with HEAVEN SHALL BURN What do you like about these collaborations?

ANDREAS: This split project with HSB is something special: We came at the same time to the music. We started at the same time to make music on the same label. We made similar music, we played a lot of concerts together, we're friends for a long time. So it was just suitable do a split. We know, that people appreciate it, if two bands they like, and who go in the same direction, make a split together. Musically, for me that is always cool. I have already done something as a guest as well. That's always a "unity thing": We are bounded. It keeps us together and we make music together.
Concerning layout for "Say Hello To Tragedy": Basti is simply a great artist, so you know, that we will get something really special for your album cover. And the fact, that Basti is even in a band, makes it even cooler.

MARC: I think the exchange of different artists is interesting. It´s interesting, what will become of a project, when various people take influence.

Are you all Shakespeare fans?

ANDREAS: Nope. We read Shakespeare, but for me it is still a bit "too much". I read rather
more solid stuff. It has started with the name CALIBAN, when our former second guitarist read "The Tempest" by Shakespeare. Caliban is the main character in it and we were just looking for a new band name. He proposed Caliban and showed us the character description. After reading that, we chose the name because, we thought Caliban is cool and this description fits to our music. Caliban is a beast, he can not be tamed.

MARC: What I liked especially about is, that CALIBAN is a proper name, that can not translate. This name is not tied to a language. No matter if in German, English, Spanish, French - it's always CALIBAN.