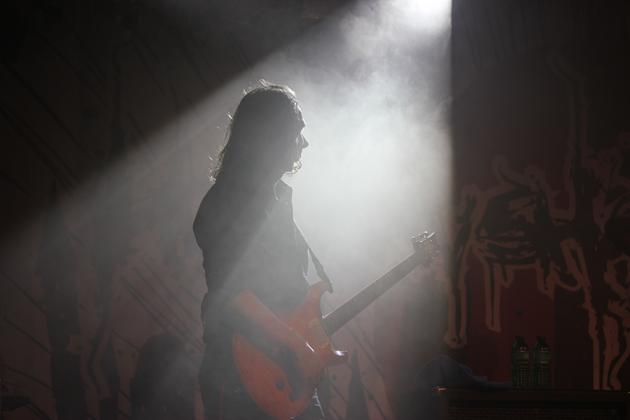 Interview with HEAVEN SHALL BURN in Karlsruhe

With a capacity of 600 guests the "Substage" in Karlsruhe is a smallish venue for the ratios of HEAVEN SHALL BURN. Nevertheless, the five Thuringian choose this club with the special atmosphere to be closer to their fans. Who showed that they are grateful by coming in flocks even from the surrounding cities. So the "Substage" was completely sold out at the 14th of June.

HEAVEN SHALL BURN stands not only for profound lyrics, but has also shaped modern metalcore like no other band.
Beyond that the band is always associated with the "straight edge" culture, which includes for example the consistent avoidance of alcohol, tobacco and other drugs.
Before the concert I met guitar player and songwriter Maik Weichert for the interview. While to support bands EMMURE and DARKEST HOUR opened the show, Maik told me the poetry in metal music and the true position of the band to "straight egde".

Maik, you are guitar player and you also write the lyrics for HEAVEN SHALL BURN. In many bands the singers are writing the lyrics. Does it feel strange for you that you don´t sing your own texts?

No, that´s not strange, because our singer sings or shouts better than me. He can give my lyrics a better expression. But it isn´t so uncommon in the music business, that people write songs and other bands play them. And it´s been like this in our band from the beginning, so it doesn´t feel strange at all. I express my emotions concerning my lyrics with my guitar. When I feel anger, when I write about child soldiers, for example, I let the anger flow through the guitar.

The titles of your songs and albums are inspired by poems sometimes, like "Deaf to our Prayers" for example. Do you like poems? And how is this compatible with metalcore?

The way is short, because song lyrics are poems in way, too. That´s why it´s called lyrics...
It´s an artistic way to express your thoughts. It´s just more poetic than telling pure wisdom. Somehow a poem is closer to the heart than to the brain and due to that it connects itself a lot better with music.

I like to talk about your attitude. You and the other HEAVEN SHALL BURN -guys are vegans, right?

Meanwhile, I must admit, we are not vegans anymore, we are all vegetarians now. We had guest musicians with us quite often and then we are all vegetarians. I´m still a vegan like most of our band members, but officially we say, that we are a strictly vegetarian band. So we can´t claim the title "totally vegan" for us anymore.

Oh, that it´s good, that we talk about it now. Because a lot people associate your band with "straight edge".

So you all decided to be "straight edge" independent?

Yes. But we found each other, because we were in the same scene. So it wasn´t totally independent. But being "straight edge" has never been an entrance creterion for our band. Since HEAVEN SHALL BURN was founded, there´s always been one member who was a party animal.

Out of all songs you did in the history of HEAVEN SHALL BURN which one is your favourite and why?

The festival season starts for you tomorrow and you will not only play at German festivals, but also in Italy, Belgium, France, Bulgaria and Turkey.

Be already played some smaller festivals, but it will start for real tomorrow. Yes, we´re touring through whole Europe.

Is there a special festival, you´re looking forward to the most?

Yes, this year the "With Full Force" festival in Roitzschjora near Leipzig is a highlight for us. Because it´s the festival, that we visited ourselves, when we were 12 or 13. It´s like our "home-festival", where we´ve used to be as members of the audience and it was a far away dream for us to play there someday. We are playing there for the fourth time and this year we´ll be one of the headliners for the first time. It´s a dream coming true for us. So it´s really something special this year.

Is there anything else, beside the "straight edge"-thing, that people should know about HEAVEN SHALL BURN?

There are a lot of things, they shouldn´t know. Just kidding...
It´s hard to say. You´re getting aware of some things for the first time, when you are asked the questions. Of misunderstandings, we´ve always been noticed as a "straight edge" band, because now and then one of us is wearing a "straight edge" shirt on stage. And we don´t promote alcohol. The band members who drink alcohol wouldn´t do that on stage and we wouldn´t join an advertisement campaign for alcohol. Because we think, it´s crap to support a drug so obviously, especially towards youngsters.
But if you drink alcohol or not is a private thing. There are a lot of assholes who are
"straight edge" and a lot of cool persons who drink and the other way around. I can´t empathize with people who believe they are better than other, because they are "straight edge". I can´t understand that, even I am "straight edge" myself.

Since when are you "straight edge"?

And why did you choose this for you?

It was the motivation of a youngster to be different, the wish to belong to a certain scene and also because I noticed that older friends of mine really had serious alcohol problems.
Where I grew up, in Eastern Germany, it wasn´t an upper class quarter. And there alcohol played a very negative role in many families. I noticed that and I didn´t want to have anything to do with that.