MIC article: INSIDE MELINA at "The Dome 61" 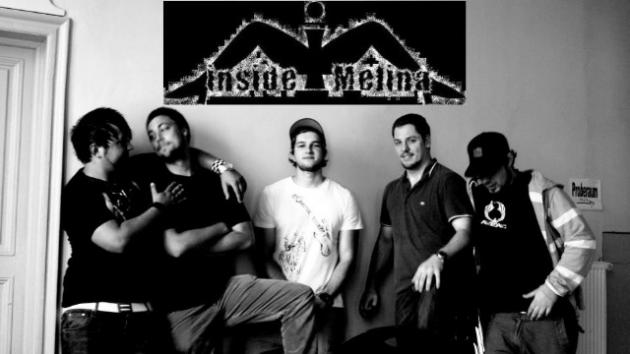 Interview with INSIDE MELINA at "The Dome 61" in Wiesbaden, Germany

On 16th of march Wiesbaden was the stage for one of the biggest music shows on German television: For the 61st time "The Dome"was taking place. In addition to THE BLACK PONY, STEFANIE HEINZMANN and UNHEILIG a young band from Baden-Württemberg, rocked the stage of "Rhine-Main Theater": INSIDE MELINA.
These are singer and songwriter El Deede, guitar players Ändy Hell and Meetya, bassist Bashi and drummer The Schill.
In December 2011 the boys released their debut album "Another Kind Of Silence" and emerged in the spring as the winner of the show's own band contest. With their song "Nowhere To Go" INSIDE MELINA did a worthy debut at "The Dome" - and a very funny interview with me immediately after this big gig:

You´ve just had your first gig at "The Dome". How do you feel?

Ändy Hell: Great, it was cool.

Baschi: It was very nice.

The Schill: My hormones are still going crazy. Whether testosterone, whether endorphins, adrenaline ... and if my ears were not grown, I would "smile around my head".

What was your inspiration for "Nowhere To Go"?

El Deede: The song was born out of a breakup. Everyone knows the situation, when you break up and you can´t forget this relationship. And then you reach the point, where you simply need to make a cut. That is the inspiration behind the song.

Was it your breakup?

El Deede: Yes, it was a passage from a previous relationship.

How did you develop your band name? Did one of you have a girlfriend named Melina?

The Schill: I still have one: Inside Melina.

El Deede: No, it actually came due to a vote. We were voting about our band name and couldn´t get a result. And then Baschi and Meetya developed this name.

Ändy Hell: We could maintain, that we tried to find something profound, but that´s not true.

Baschi: He just doesn´t want to admit, that he had a Melina, too…

Ändy Hell: "Melina Inside" sounds conclusive and anyone can pronounce it. We were "inside Melina", thank you...

In december you released your first album "Another Kind Of Silence". How was it for you to produce it without a label?

El Deede: Difficult, very difficult. Ändy is the one to tell you.

Ändy Hell: Yes. It was very expensive. I paid the biggest part of it. But it was it worth, I always wanted to do it. Now I paid the price, but it seems to be worthwhile.

El Deede: That was our dream. We have mastered the album in Los Angeles by Brian Gardner, who has already mastered our idols. It was just our dream. We made it come true and we got the money together. It´s tough, but perhaps there´ll be a label now, who says: "You´re cool, we like to work with you".

Do you have a favourite song from "Another Kind of Silence" and why?

Baschi: "Whatever You Want Me To Be", because of it´s energy.

Meetya: My favourite song is "Whatever You Want Me To Be" too, because of the speed it and because "it beats you up". I like that.

El Deede: My favourite song is "Story Of A Life", because it´s a good song and it rocks.

Ändy Hell: For me "Nowhere To Go" is one of the best songs on this album.

The Schill: I agree, because the singing is pretty versatile. Before the recording session in the studio we had only a short time to arrange that song, and somehow I knew immediately what to play. And the song has somehow creed style, which I think is very great. So I would say: "Nowhere To Go."