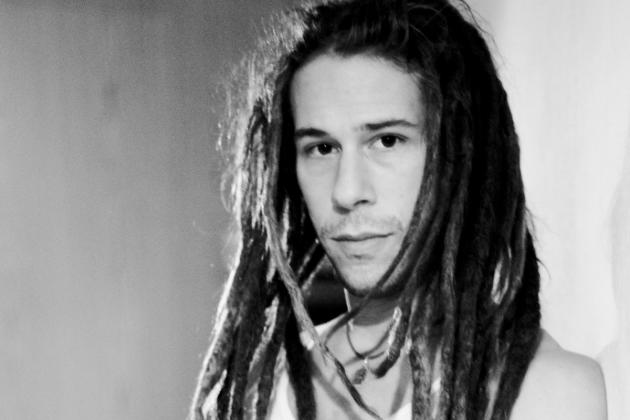 Interview with JAHCOUSTIX at "Rock am Ring" 2012

A tranquil small village in Germany, three stages, over 70 bands and 85 000 visitors. That was "Rock am Ring" 2012. From the 1st - 3rd of June the sold-out "Nürgburgring", that used to be the location for international motor sport events, hosted for the 26th time one of the oldest and largest music festivals in Germany.
In addition to the headliners LINKIN PARK, METALLICA and DIE TOTEN HOSEN a young reggae musician attracted the attention: Despite the pouring rain, there was a big crowd in front of the "O2-Alterna" stage, when JAHCOUSTIX and his band started their gig on Sunday afternoon. With hot rhythms he made his fans for a moment forget the weather completely.
In the following interview JAHCOUSTIX chatted with me about his new single "World Citizen", his collaboration with SHAGGY, the charity project "Think Big" and his dreadlocks.

It's raining and you've just brought some sunshine to the stage. How does it for you to be at "Rock am Ring"?

It is a great honor for me to play at the festival, because we are a reggae band and this is a rock festival. It is something special for us as a reggae band to be at "Rock am Ring". Last night we played at "Rock im Park" and now we are here. We are really happy about it. Today it was raining pretty hard, but as you said, we tried to bring sunshine on the stage with our music. The show has felt just great.

You've just released the single "World Citizen" together with SHAGGY. How was it to work for you with him?

SHAGGY is a world star, he is a great musician. He has so much experience in the music business, so it was a great experience for me to meet him and a great honor to do a song with him. And the whole thing is for a charity project. All the circumstances of working with SHAGGY have been great, to shoot a video with him and to meet him personally.
SHAGGY is very "grounded", he does not need to prove something to himself or to others, because he has made so many experiences in his life. He's just himself and he did not act like a superstar. He's very grounded and during our video shoot it was no problem for him to repeat a take two or three time or more often. All this was a great experience for me.

This music video of "World Citizen" takes mostly place on a bus. In which city did you do the shooting?

How many days did you shoot?

It was only one shooting day with Shaggy. And a second day, where shot such a thing as a making-of.

You mentioned, that you support a charity project with this song. Can you tell us more about "Think Big"?

"Think Big" is a Youth Foundation, which works with the federal government. It supports youth projects. This means, that if you are a teenager and you have a vision or an idea, you can to "Think Big" and present it to them. And if you convince "Think Big", you will get support to realize your idea. That can be financial support or support in form of marketing campaigns, for example. The idea of "Think Big" is really to "think big", to believe in your dreams and to have the confidence and to be convinced, that you can make little things become big.
It's a great opportunity for young people, because I have the feeling that today in our society young people are in a situation where others often do not trust them. Some say, that the "youth of today" is spoiled, has no ideas or does not want to take the initiative, but that is not true. Many young people have just not the support, they would need.
And if you always hear, that you are not good enough and that you are not able to set something off the ground, will that certainly not help you to go your own way.
I think, it's very important to give young people hope and a feeling that they can realize their ideas and do something great.
For that reason we had for the video the idea to bring more and more people in the bus and at the end of the day we are all the same. We're all equal in the bus.

I would like to talk about your hair. Looks cool, but for you it is more than just a style, right?

Yes. It has changed a bit over the years. When I first grew dreadlocks, it was an expression of my inner rebellion against certain things in the system, such as racism and injustice, that a small number of people is very rich, while a large number of people is very poor. Exactly these social critically attitude made me grow my dreadlocks.
But I have to say, now I know, it's not always that easy. You can not just be against something all the time. If you're always against something, you don't make it better. You have to search for solutions. Therefore, my dreads are for me today more like a kind of memory. They always remind me of these social aspects, because of which I grew it. That's my recollection, that's what I always carry with me. They are like roots, they are my connection to my nature-loving way of thinking, because I am very close to nature. I am very interested in natural philosophies, such as the Indians and the Aborigines. This kind of old traditional philosophies of people who were extremely close to nature, interests me very much. And that's one of the reasons why I wear these dreads. They are like roots, like the roots of a tree (he laughs).

Does it also have to do with faith for you?

So faith plays an important role in your life?

Of course, but it all depends on how you define "faith". Some people define faith only by the systems of religion. I define faith and not by religion. I see myself as a part of it, a part of this planet, a part of the universe. And I don´t want to be part of a particular religious group, which sees only one truth in life, because people see so many different truths. They have only one perspective. I don't want to cling to only one perspective and believe in only one truth, because the truth is variable. It changes all the time.

Does this attitude influence your music?

Definitely. It influences my music in the way, that I don't want to project any truth into the people. I don't want to write my lyrics with a wagging finger and say: "You have to believe THIS, you have to think THIS and you have to see things from THIS perspective." People are free. So I tell them with my music, that they should believe in themselves and that they should make their own decisions. They shell make their own experiences and make decisions on that foundation. Who am I, to tell people how the world is or what to think?